At the weekend, She Who Must Be Obeyed and I had a day out in London culminating in a show in the evening. Before we had even booked our train tickets, we knew the journey was going to be difficult because there were planned engineering works on the line somewhere between our station and our destination.

We booked our train tickets anyway, and planned our day with this is mind. Normally our journey would start by heading east on the train for about 10 miles before heading north for the remainder of the trip. However, the journey, according to the rail website, was to be partly undertaken on a bus! The disruption meant us getting a train to Brighton, a bus from Brighton to Haywards Heath and a train from Haywards Heath to London. There was nothing, short of driving part, or all, of the route ourselves, that we could do about this.

We arrived at the station but boarded a train going in the opposite direction as the rail staff felt it better that those London bound would be better going west for 20 miles, changing trains, coming back east for 10 miles, turning north east for 20 miles and then heading north! Unfortunately, the staff hadn’t reckoned on the train we had to change to being shorter than the one going in the wrong direction and already full making the bulk of the journey very uncomfortable.

However, that was nothing compared to what the train company had in store for us for our return journey.

We asked them which train we should catch for our destination. They checked a sheet of paper they were holding and informed us no trains were running to that station due to engineering works. This we knew! Another member of staff joined in and advised us that we needed to board the 22:47 to Haywards Heath where the service would terminate and we would then have to board a bus for the rest of the journey.

However, in the time it took them to tell us this, the gates to the 22:47 closed!

There were two more trains waiting to depart that were due to stop at Haywards Heath. The first left at 23:02 and the second at 23:06. The member of staff advised us to catch the latter as it was a faster train and would arrive at Haywards Heath first.

We duly followed his advice and board the said train.

It is worth pointing out that no trains should have been going beyond Haywards Heath as the line between that station and Brighton was where the engineering works were being carried out. The train we had boarded was destined for Brighton!

For the next 50 minutes there were no on board announcements and there was no sign of a conductor.

We arrived at Haywards Heath expecting to be told the train was terminating at the station, but no announcement was forthcoming. However, following the advice given earlier, we disembarked, partly because there was no scheduled train from Brighton to our station after midnight, and made our way to the car park to board our bus. The train, however, continued the rest of the journey to Brighton complete with the other passengers!

Once in the car park, we were informed that the next bus for our destination wasn’t due to leave for another hour and twenty minutes.

There was, however, a bus leaving in 10 minutes taking passengers to Brighton because of the engineering work.

Wait a minute, didn’t the train we were just on continue to Brighton? If so, where are the engineering works?

I asked another member of staff who was unable to give me an answer!

Fortunately, another member of staff was a little more helpful and immediately made a phone call to clear up the confusion. It seemed that the bus service was continuing because passengers had been told to get off at Haywards Heath. He also advised us to get the next bus to Brighton as there was a further bus service from there to our destination sooner than if we waited where we were!

Once again we followed the instructions given and boarded the bus.

Thirty minutes later we were waiting at Brighton for another bus – which wasn’t due for a further thirty minutes! 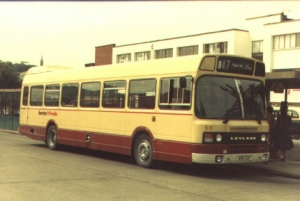 State Of The Art Bus!

When the bus finally arrived, it appeared to be one which had been salvaged from the scrap yard and had last been used in the 1980s. It was the most uncomfortable bus ride you could imagine (in this country anyway) which eventually dropped us at our destination station at 02:15 – tired and and incredibly shaken!

I am approaching my saga years (rapidly)! Correction, I have now reached my saga years! I am a thespian who has appeared in commercials and films and on TV, and love my time on stage but am extremely frustrated that I get most my work as an amateur. When not on stage I can be found walking the countryside, leading worship at my local church or running IT training courses and fixing PCs – just waiting for that better offer!

I'd love to hear your views... Cancel reply