Once again, it has been weeks since I posted anything here. Clearly I must be experiencing writer’s block! Maybe I need something to get the creative juices flowing. Maybe I just need more caffeine.

The latter option has become easier in my town with the opening this week of a new coffee house. A coffee house which has been the subject of an online debate about the need for another establishment of this type in my town. Most contributors seemed to think it a bad idea when we already have several outlets providing refreshments.

However, I believe it better to have the empty retail units, of which my town also has plenty, filled with something useful than sitting there looking very sorry for themselves with boarded up windows. Or worse still, with broken windows! And why not fill it with a commodity that people are going to need every day (not necessarily coffee, but sustenance). It could have been another mobile phone outlet, of which there are already around eight in a half mile radius. Or another charity shop (also about eight in that same area).

At least it wasn’t another Greggs or Subway – I have nothing against them (I don’t use them!) but we already have two of each of them in that half mile stretch of shops.

Anyway, back to the coffee house!

I decided to give it a try and arranged to meet my good friend Mr Plenty there.

Our first impressions were that it was clean, bright and airy (well, it has only been open four days!) and busy. There were newspapers (including the local rag) to read. There were small tables and large tables to cater for any sized group. There were soft seats, stools and sofas. It all looked quite comfortable, but what of the coffee?

We placed our order at the counter – not a particularly challenging order, one Americano (black absolutely no milk – I stress that because I am often being asked if I want milk when I ask for a black coffee!) and a Cappuccino. Then came the long wait…… 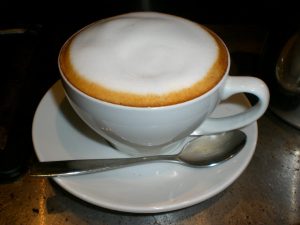 Maybe two coffees was a more complicated order than I first thought!

First came the Americano (black as requested), but the manager felt it had been prepared incorrectly and refused to serve it to me. So, we waited again for the next attempt…….

Then came the Cappuccino – pale, insipid and not at all coffee like! So we waited again for the next attempt…….

Then came the new Americano and another wait…….

Were they worth the wait? Well, the Americano, which was mine, was very nice, strong, full flavoured. The Cappuccino? There was so much froth, Mr Plenty had to tunnel down to the coffee at the bottom of the bucket it was served in!

I think we’ll give them a couple of weeks to settle down before we try them again.

As an aside, if you visit the toilets (at least the one I used) then you need to under four feet tall to see in the mirror and to use the hand drier (and for once, I and not exaggerating!) .