It’s a little after 6.00am; I’m squashed in a taxi heading towards Gatwick Airport with She Who Must Be Obeyed by my side and two other people I had never met before. There are four cases bulging out of the boot; there’s hand luggage crushed between the knees.

Is this a nightmare? No, it’s the next stage of our journey to the sun.

She Who Must Be Obeyed and I were heading off to Egypt in search of some much needed sun. We had arrived at the train station only to discover the trains were completely disrupted due to a fire in a signal box. So, with no trains we had to organise a taxi to get us to the airport and were sharing it with two complete strangers who were also desperate to get to the airport.

Earlier, when we arrived at the station, it was a dark, dry morning. There was a hint of moisture in the air, but nothing to dampen our spirits. That all changed with the cancellation of the trains, and now that we were squeezed into the taxi, the moisture in the air had turned to rain. The male half of the unknown couple was keeping the taxi driver occupied with rather inane small talk.

Despite the delay, we were now en route and the only thing between us and our sunshine holiday was about 35 miles of road and a five hour flight. And, as it turned out, quite a bit of traffic and some road works! However, the airport was getting ever closer and although we were behind schedule, we still had plenty of time, so nothing to worry about. I was able to sit back and enjoy the taxi ride knowing that I if I dozed off I wouldn’t miss my stop. All was well. Except of course, I couldn’t sit back and enjoy the ride as I had been crow barred into the back of the taxi because the other (much shorter) man had grabbed the front seat and I had hand luggage shoved into any available orifice!

I knew that I only had to endure, providing there were no further issues, about 40 minutes of this discomfort.

The journey, though slow through the road works, was coming to an end; the airport was in striking distance and I was shortly to be plucked from the back of the cab, straightened to my normal height and would have the hand luggage surgically removed from wherever it had settled during the drive! As we made our final approach to the South Terminal, the other male passenger suggested the taxi driver took them to the North Terminal first as they had an earlier flight. Which is true, they did, but they were only flying internally; a flight of about one hour for which they didn’t have to check in more than one hour ahead. We were flying to Egypt; a flight of about five hours for which we had been advised to check in at least three hours ahead of departure.

So, we skirted round the South Terminal and headed north. My discomfort was to be prolonged for a few more minutes. At the North Terminal, the unknown couple scraped together their half of the taxi fare, gathered their luggage and departed. We then did a U-turn and headed back, from whence we came, to the South Terminal. A few minutes later we arrived at the terminal – out of pocket, having paid for the journey twice and behind schedule.

With us being later than expected, I envisaged a large queue having formed at the check in desk. She Who Must Be Obeyed and I would be split up and seated at different ends of the plane. However, to my great surprise, there was no queue. We still had to walk through the queuing system; zigzagging our way to the front! Then came the moment of truth – had I packed the passports and tickets? Had I packed them? Of course, I’d been checking my pocket every few minutes of the journey to ensure they were there! 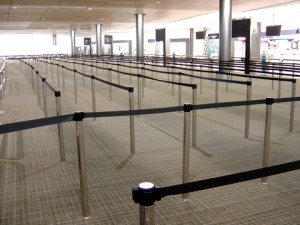 What I hadn’t reckoned on though was my hand luggage being overweight.

In fact, I have never had my hand luggage weighed before that day. Fortunately, my case was slightly under so a quick rejig and everything was beautifully balanced.

Having passed though passport control to reach airside, I decided to get a coffee to drink whilst passing the time to boarding, and She Who Must Be Obeyed wanted a magazine to read. My coffee was fairly easy to purchase; no real challenges, however, She Who Must Be Obeyed needed to call me over with her boarding pass to buy a magazine! And the person behind her needed his for his bottle of water!

I understand why it is necessary to prove one’s destination for duty free, but for a magazine? And why for a bottle of water but not for a coffee?

And with that purchase came the call to make our way to the boarding gate. Gate 94! That sounded like an awful long way from the main departure lounge, but as luck would have it, it was the very first gate we came to! However, it wasn’t one of those gates where the plane is right outside. No, we had to board a bus to take us to the plane. Once the bus was full, it set off. This would just be one of those short hops from the terminal building to the plane which was parked a few meters from the stand – wouldn’t it? No, far from it. We seemed to do an entire tour of the whole airport starting from the South Terminal; going round the perimeter road to beyond the North Terminal. Round the back of the North Terminal to the cargo area where our plane was parked (see map below – from A to B). 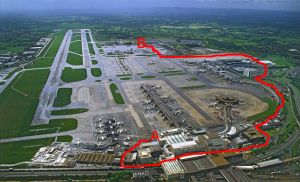 For a while I thought the bus was taking us to Heathrow Airport some 42 miles away!

Were we ever going to get on a plane and get to the sun?